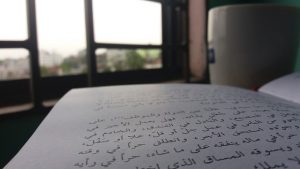 Arabic is a language which many people might consider to be too difficult to try to learn. It doesn’t only have an alphabet consisting of letters which look confusing to a lot of people, but those letters are also written in the opposite direction. LearnArabic.com offers an introduction to Arabic with both free and paid options.

Once you register, there are a number of courses to select from. As this was my first exposure to Arabic, I picked the Beginner’s Elementary Arabic Course. The course started with a video which walks you through the Arabic alphabet, which consists of 29 letters. After the video, the alphabet is again presented in a way in which you click on the letter and the sound is pronounced. This sound feature only works on Firefox. I first tried using it on Internet Explorer, and there was no sound. The chapter concludes with a game in which you match the sounds to the letters.

Further on in the beginner’s course is an introduction to morphology and word formation in Arabic. This section teaches you your first 100 words. The next section leads to the formation of phrases and sentences, and a wider vocabulary. The beginner’s course concludes with three sections on basic grammar.

LearnArabic.com offers a good opportunity to test drive Arabic. If you have considered studying Arabic, but aren’t completely certain, it’s worth looking at.