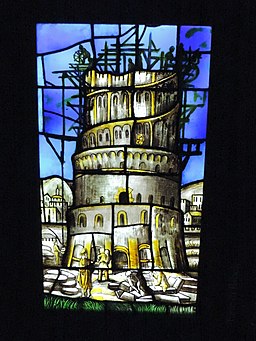 The Bible story of the Tower of Babel is an explanation of how the people of the world came to be speaking different languages. According to the story in Genesis 11:1-9, which occurs several generations after Noah’s flood, all of the people in the world speak the same language. They decide to build a tower that reaches into heaven. God angrily stops the construction of the tower, and fixes it so that they’re all speaking different languages from each other. God hopes that this will stop them from being able to work together to build such a tower again. He also scatters them out to different parts of the world.

Biblical archeologists have tried to find out whether the Tower of Babel really existed, and if so, to try and find its remains. The main candidate is the Etemenanki, a Babylonian temple which was dedicated to the pagan god Marduk. If this is the building that the Tower of Babel was based on, it’s obvious why the Biblical God didn’t like the tower.

There are similar stories from numerous other cultures around the world, including Sumer, and from such far-away cultures as Central America and sub-Saharan Africa. Numerous stories from the Old Testament have similar stories which come from Mesopotamia. Many skeptics believe that the ancient Hebrews were exposed to these stories during the Babylonian exile, and later incorporated them into the Old Testament. However, when one considers the other cultures which have a similar tale, it’s a strange coincidence that a number of different cultures came up with a similar story as to why we have different languages.